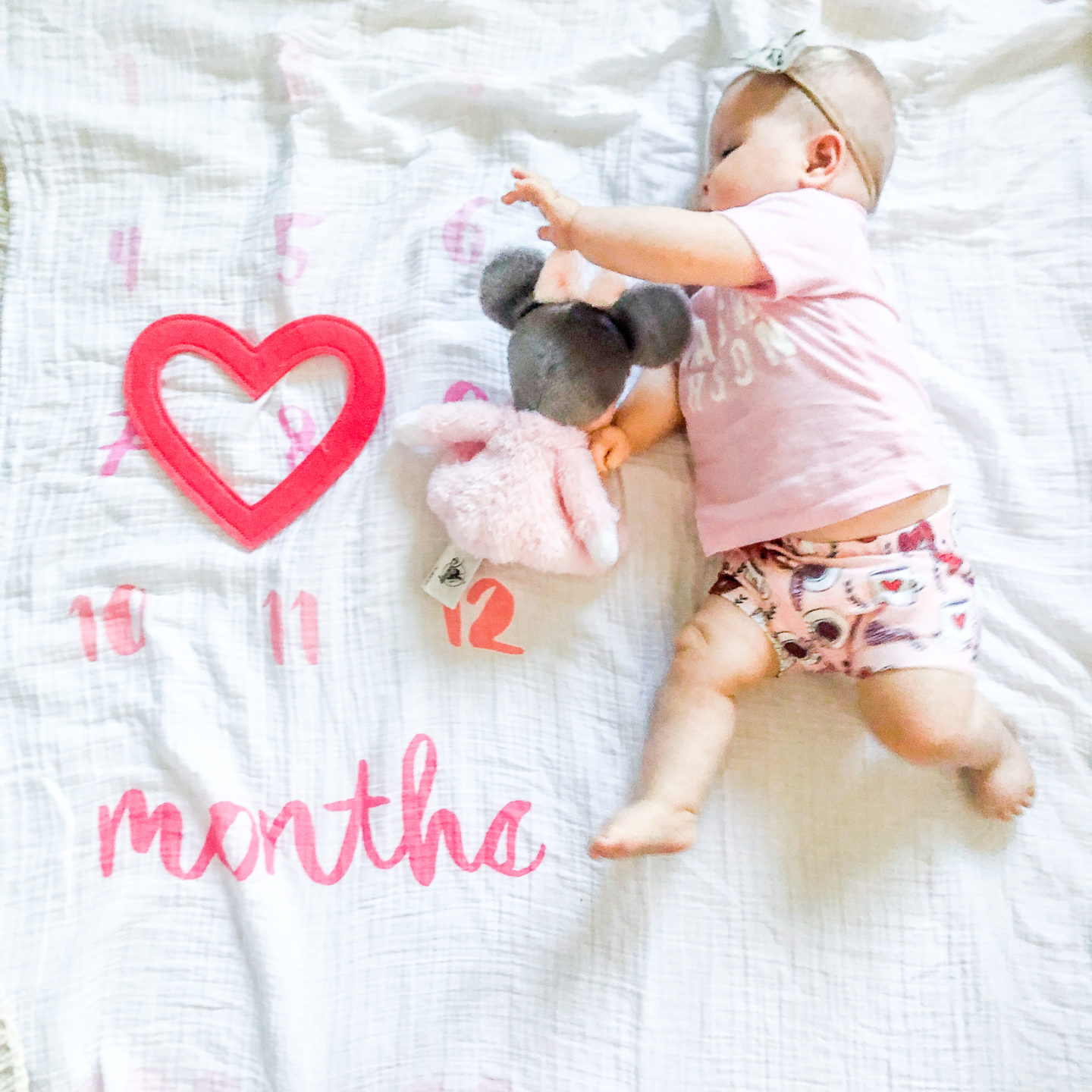 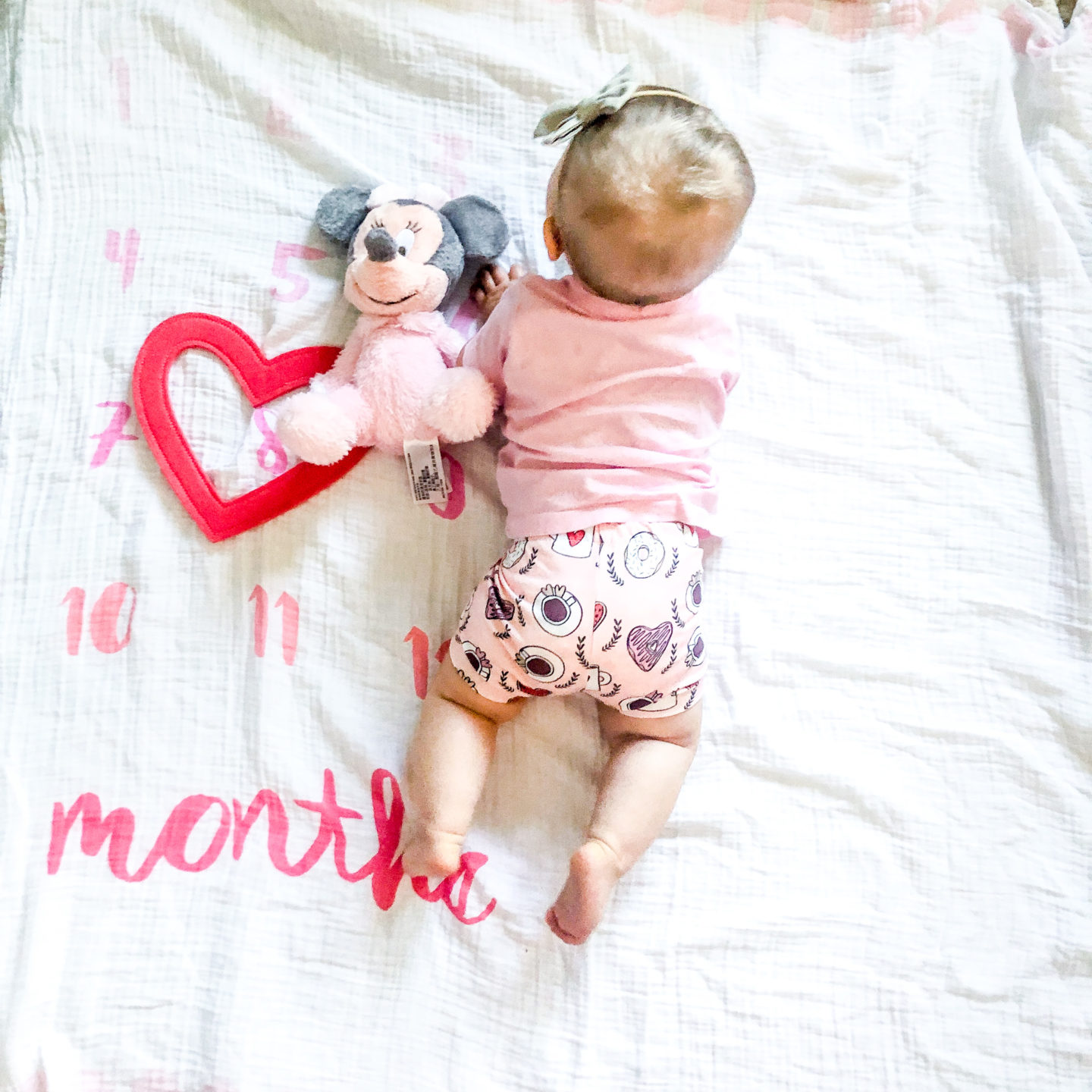 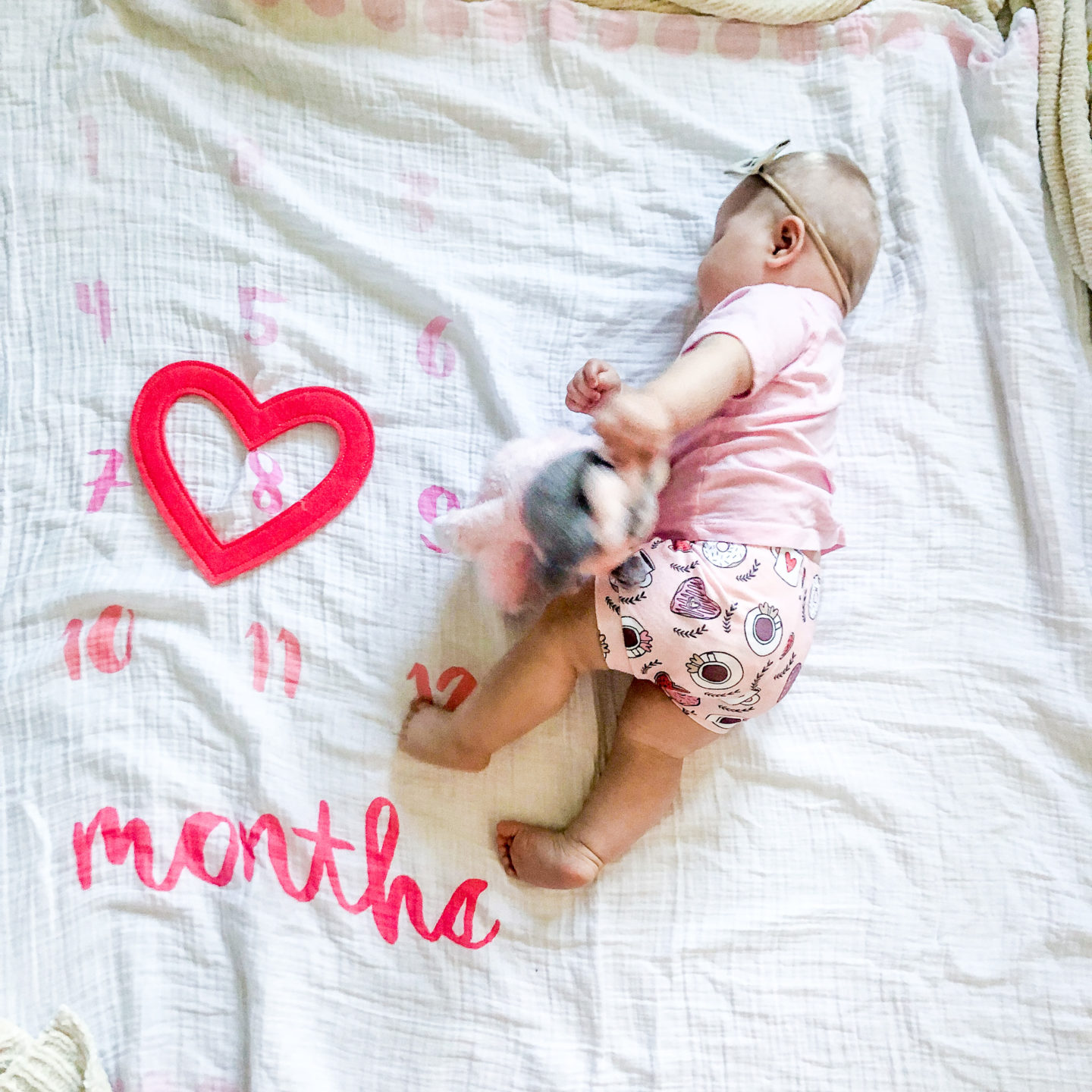 This is a little late. I haven’t known how to resume self-related content in the midst of trying to amplify the push for racial equality for black human beings. I’ve thought a lot about how I’d rather it be a marathon and not a sprint in that I don’t want to spend a week sharing about resources and statistics and truths and then go back to “life as normal.” I’m in it for the long haul.

There’s a lot to be said about how I personally have had to confront my own racism. I was raised by a black man, my stepfather, and my stepmom is filipino. It doesn’t make me less racist or more of an ally, I think it’s just made me more painfully aware of the ways in which I have lived my life with racist thoughts.

I think there’s current, right now action and support to be taken and given. But I’ve always stood by the quote “It’s easier to build strong children than repair broken men,” and Madeleine is the future. She doesn’t know to think “…for a black person,” or “they should speak English.” She is the opportunity to build a strong child.

Anyway. Now she’s 8 whole months old, and she’s turned into quite the handful. 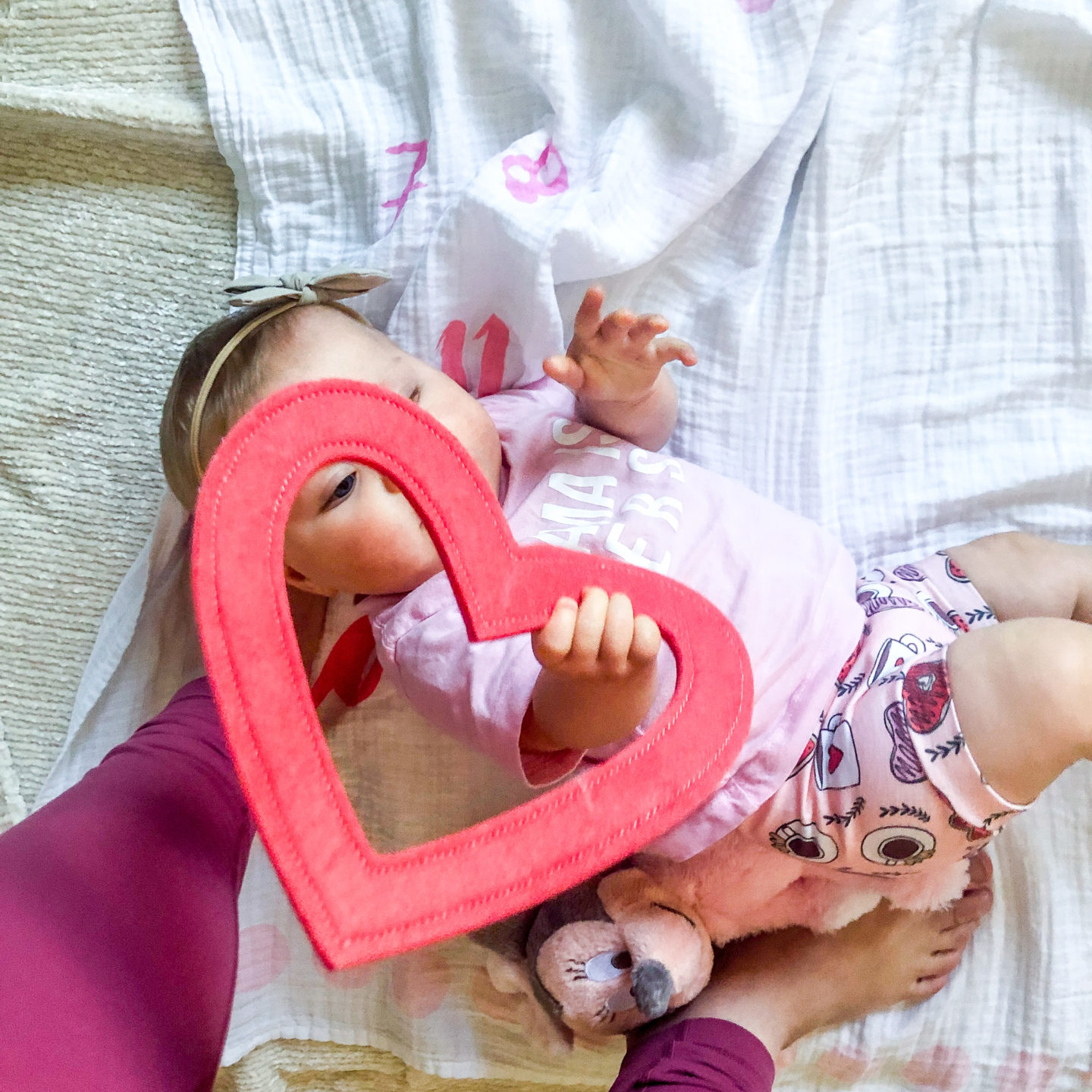 I gave up on taking a nice photo, because she. won’t. sit. still. Like… ever. My camera roll is full of photos of her halfway under the couch, into things she doesn’t need to be, and I love it. I love her. She wakes up ready to play and plays for about 3 hours on. the. dot. and then sleeps hard. Her naps have started to bulk up, so there’s more of a chance she’ll sleep for 2 hours during a nap instead of waking up 35 minutes after going down.

She started popping teeth, two of them coming in on the bottom.

She’s using up the last of her size 2 diapers and will now be wearing size 3. At night time she has to wear overnights because she was leaking through so often. I was bummed that Goodwill was closed so I couldn’t get more diapers for her, and on my first trip I found some Honest diapers in size 3 (our favorite brand of diapers)… but they were skulls. The next trip I found another box of 3s… that were dinosaurs. It’s funny because she wears lots of pink and unicorns and then has skull diapers. Whatever man, the box we got normally goes for $28 at Target and I only paid $13!

Here are a bunch of random moments from this past month of Madeleine. 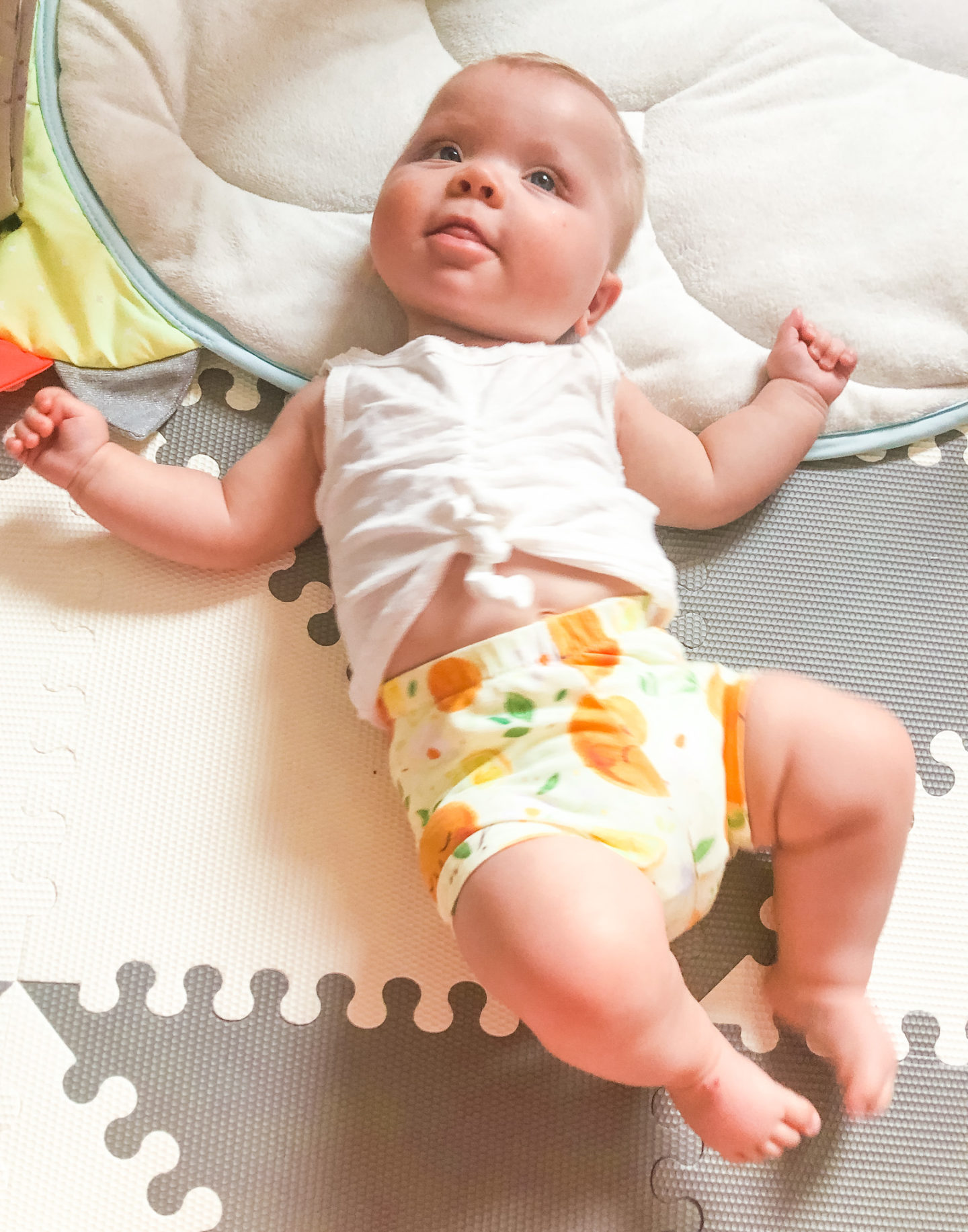 We got a new rug and promptly set up these foam mats over it for Madeleine to roll around on, and they are honestly one of the best purchases we’ve ever made. I’d been looking for something like these and when Justen found them at Goodwill for… wait for it… $25 (they’re normally $90) we immediately bought them. So much for our new rug. 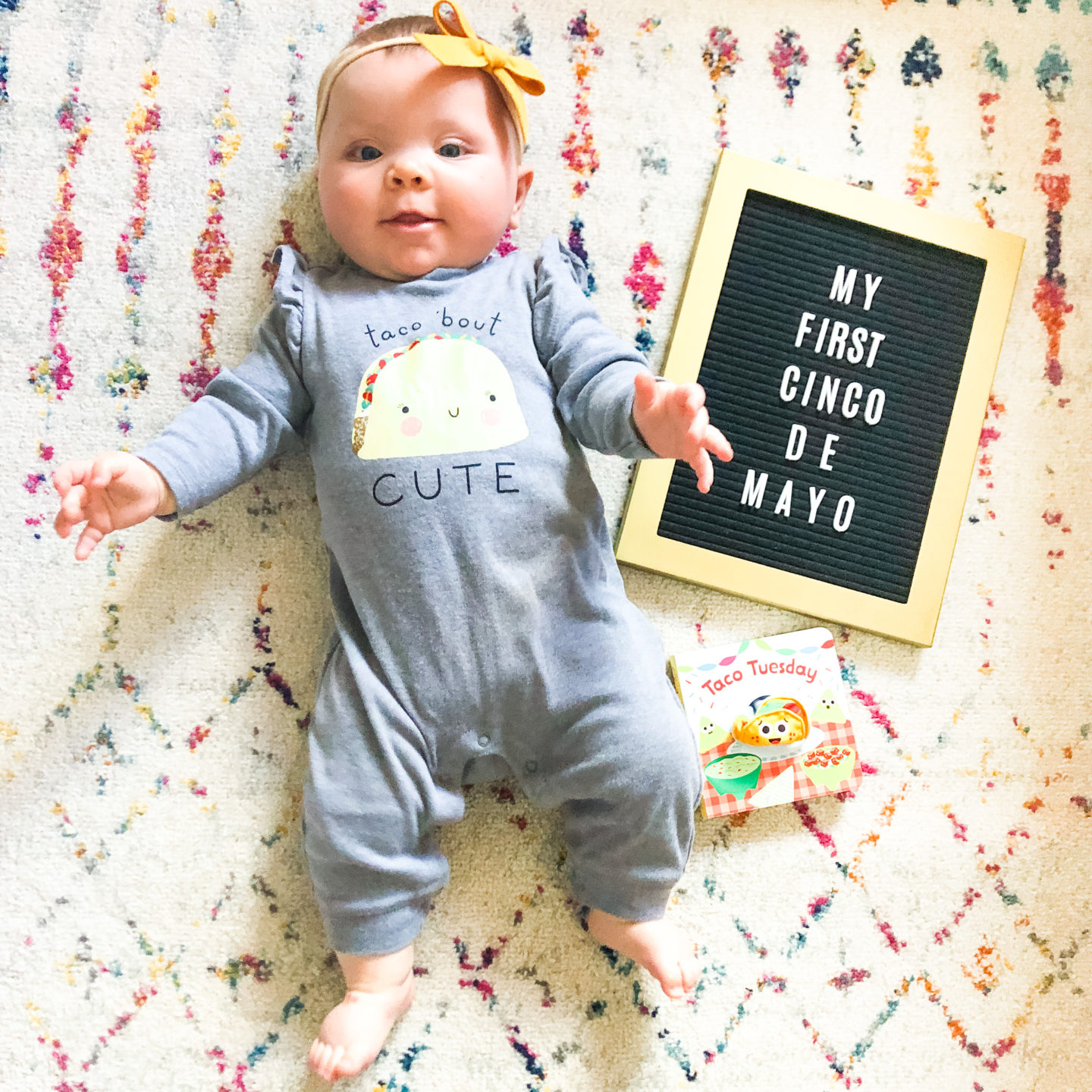 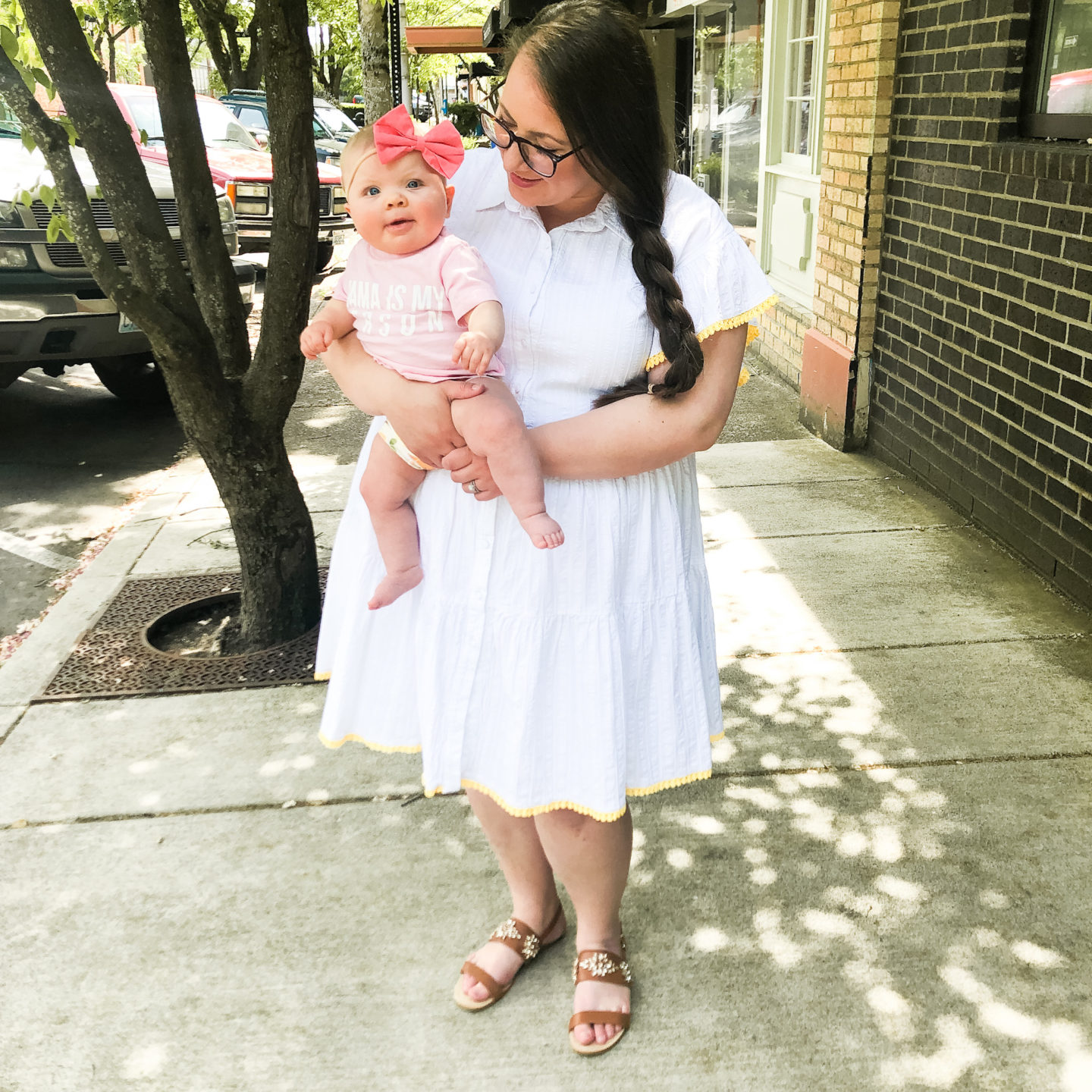 Celebrated our first Mother’s Day. It’s weird that I say  “our,” but I honestly feel like it’s a day to celebrate our relationship as mother/child. I’m a mom, but I wouldn’t be without her. Her shirt says MAMA IS MY PERSON, it’s from Babefetti, and it’s my FAVORITE. Babies in t-shirts is the cutest. 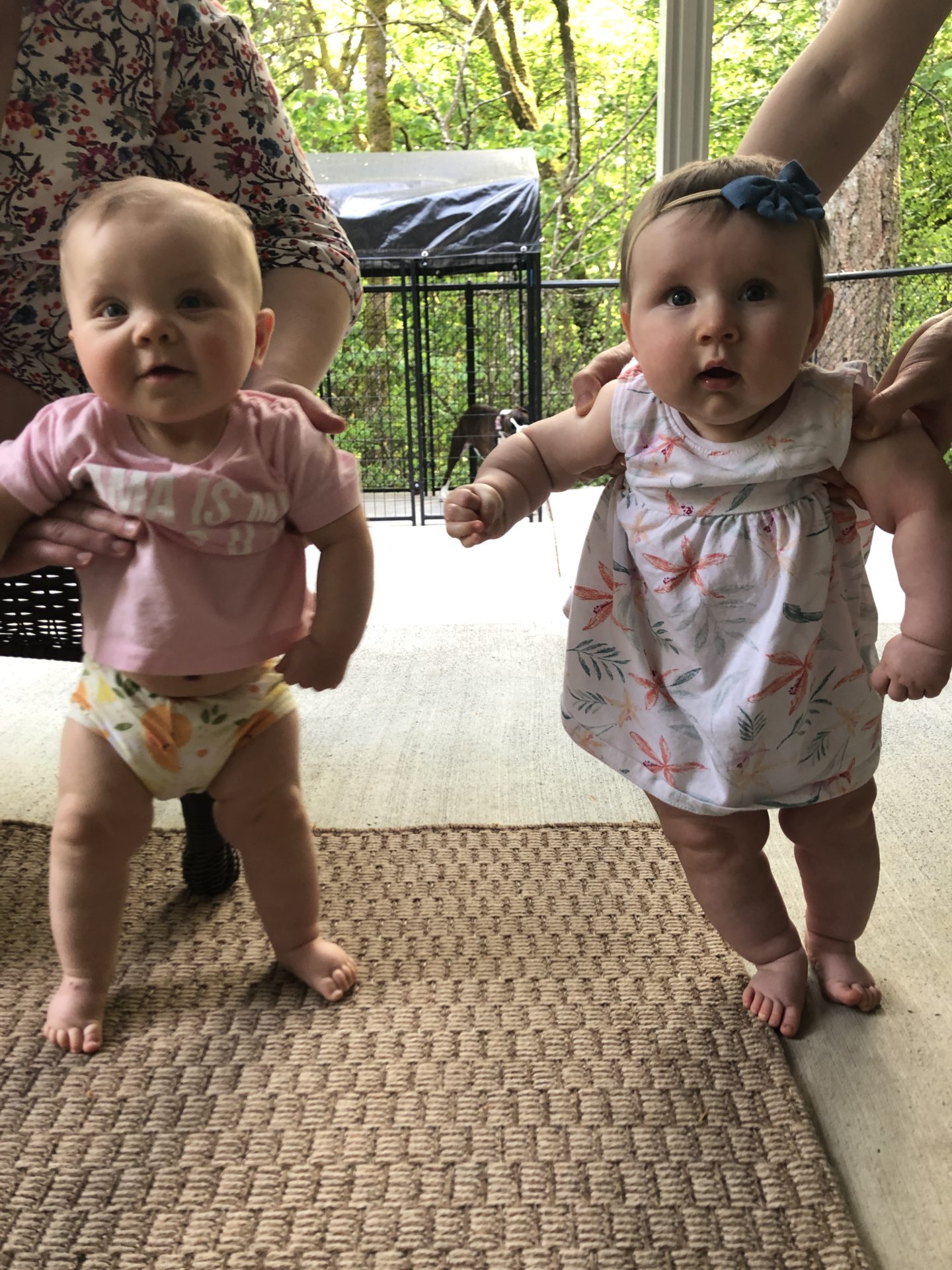 Madeleine and her cousin Taya. They’re 5.5 weeks apart and I can’t wait to watch them grow up together. 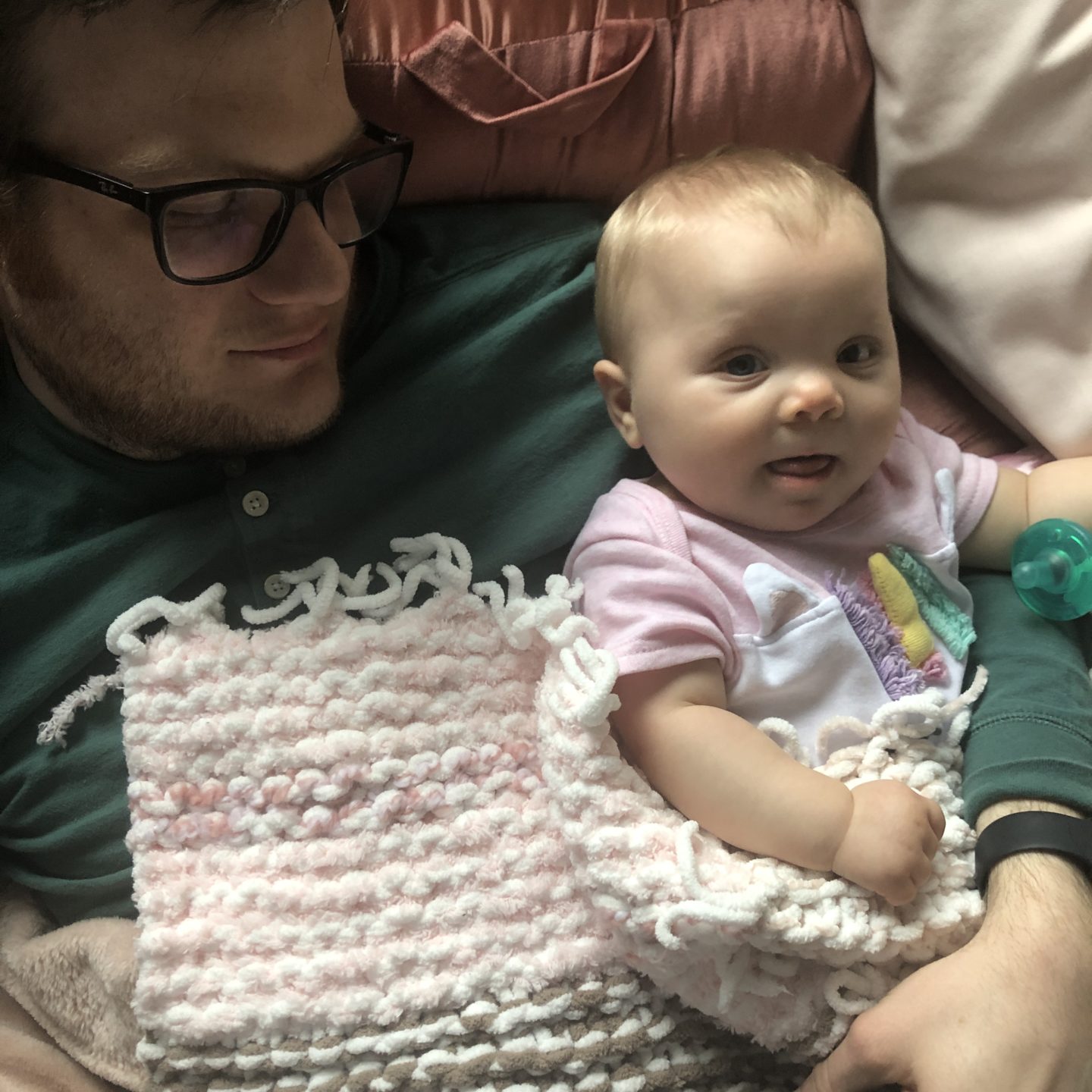 I love her so much. and I love this little chambray top from baby Gap. When she grows out of it, I will be SO SAD. 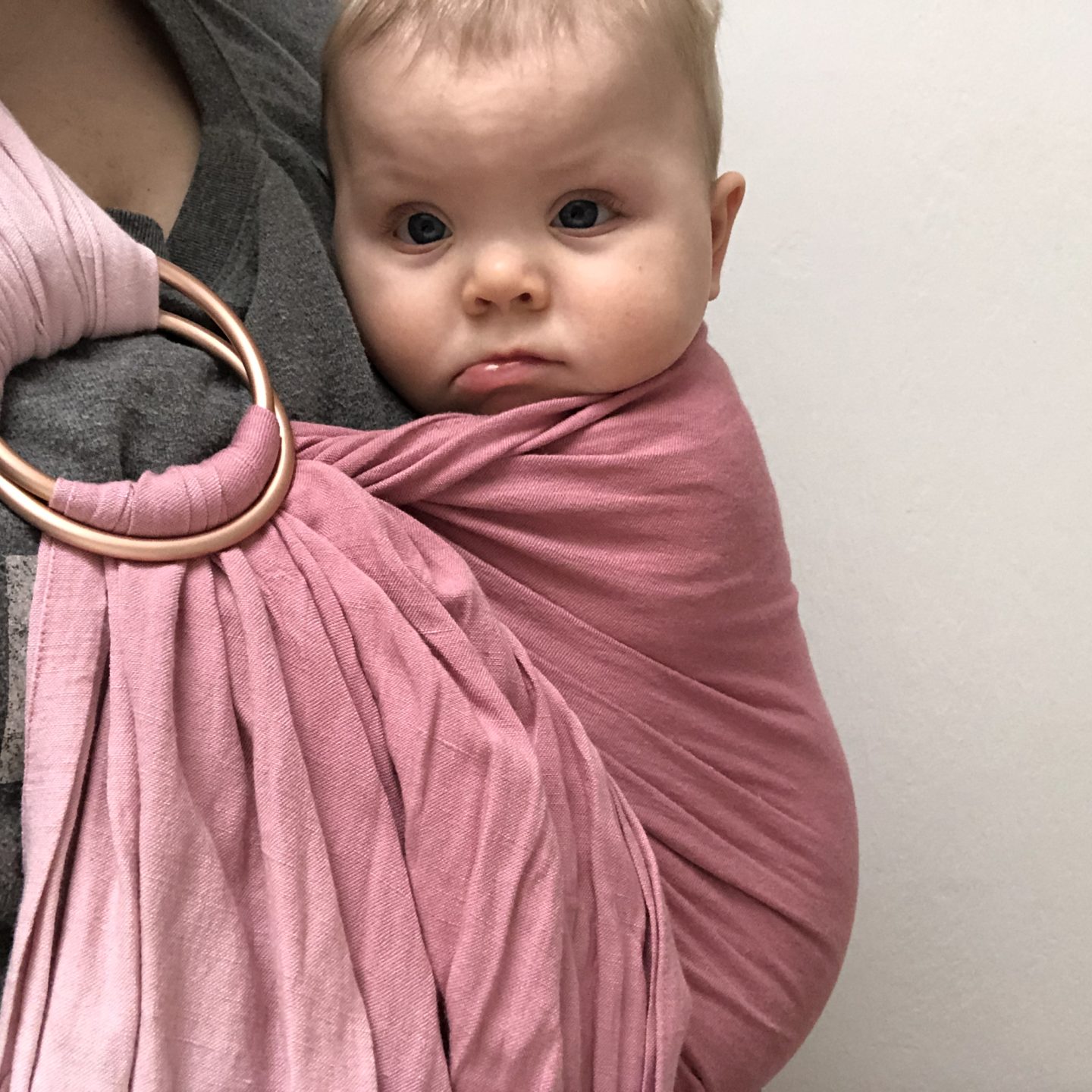 Babywearing hasn’t been too successful for us, mostly because Madeleine can hang for like 5 minutes and then stretches her body straight out and struggles against it. But when it’s almost nap time but it’s time to go down the hall to switch the laundry, baby wearing is a life saver. This ring sling is SO PRETTY. It’s pink ombre with rose gold rings. It’s available on Amazon (but I got mine at Goodwill because.. .duh). 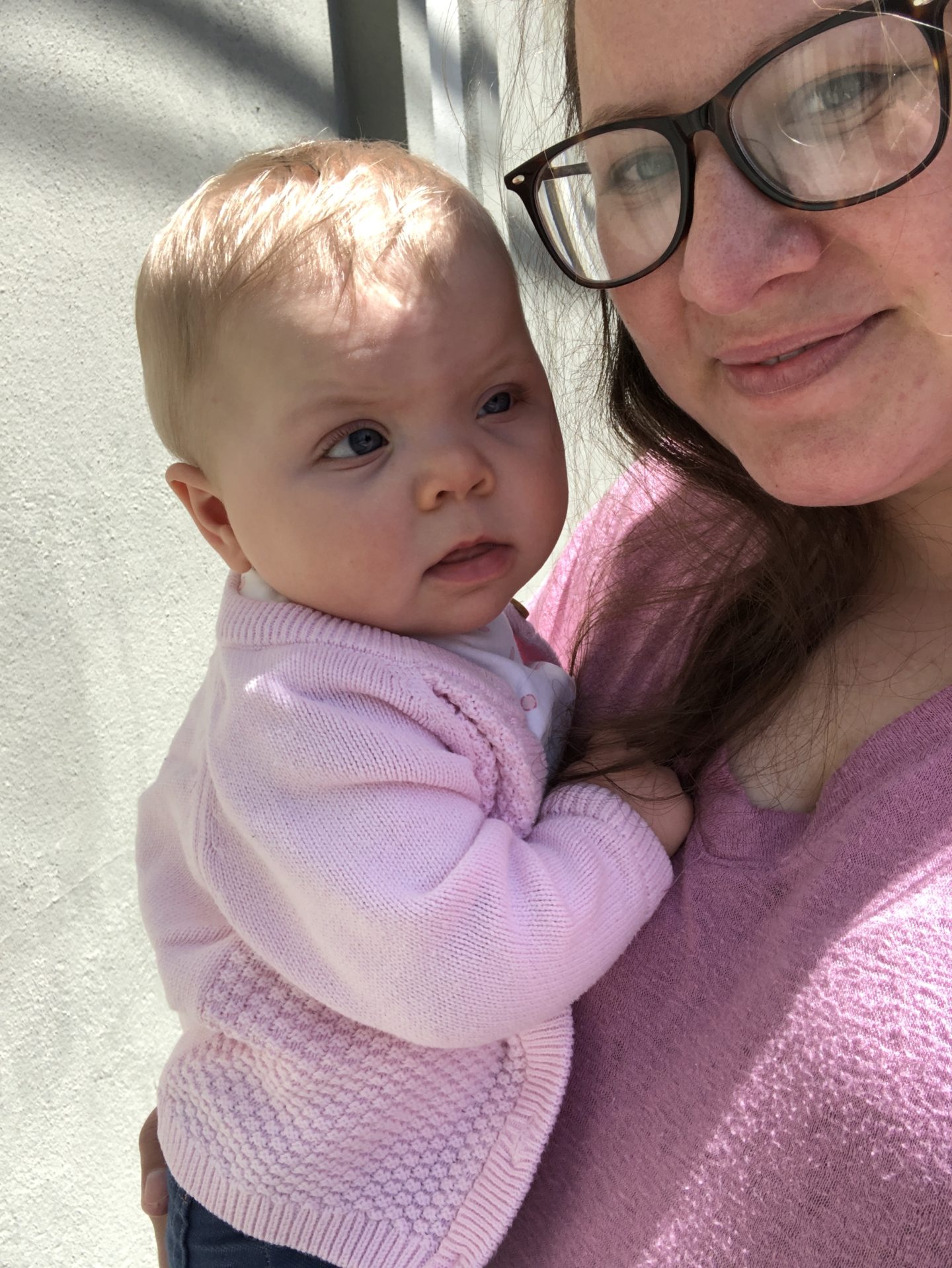 Babies in cardigans are my favorite thing ever. This little pink cardigan is from Cloud Island and she wears it ALL. THE. TIME. 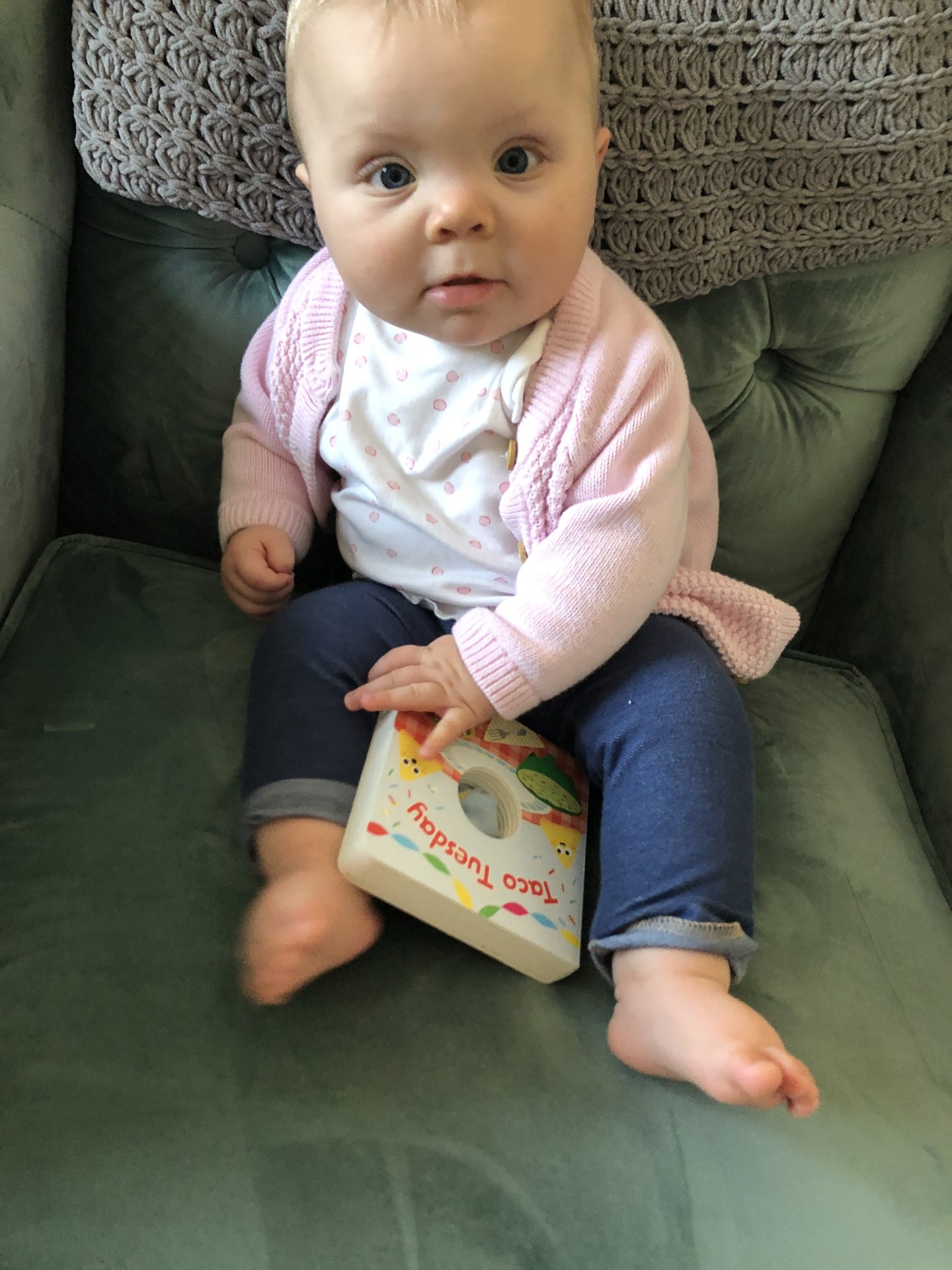 My faves: baby in a t-shirt and cardigan and skinny jeans. plus Tacos. 🙂 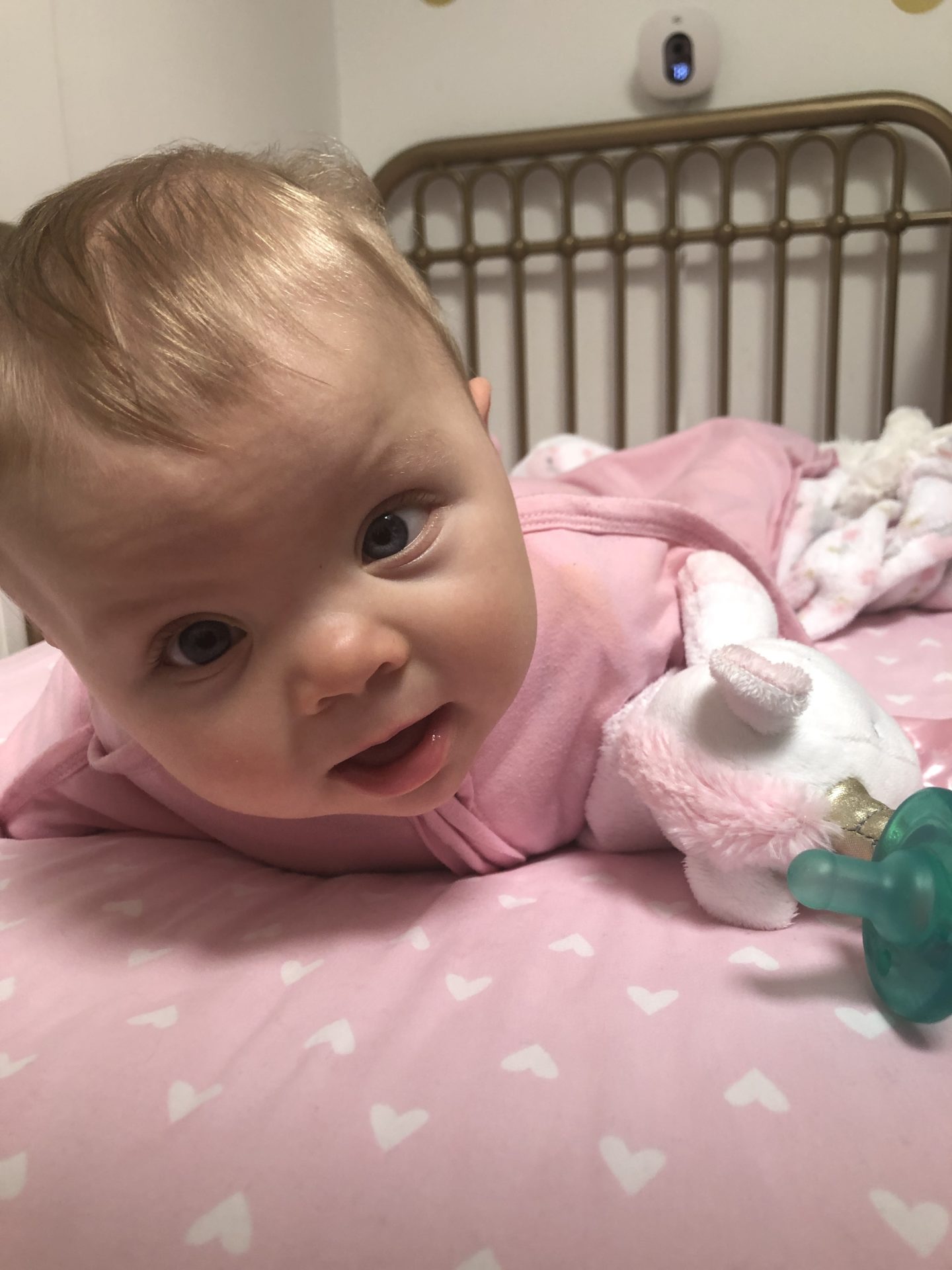 Maybe one day I’ll do a post about how I’ve tried almost every. single. sleep. swaddle/sack/contraption. Literally… regular swaddle? check. velcro swaddle? check. hands up swaddle? check. the wearable blanket sack? check. zipadee zip? check. merlin’s magic suit? check. All I’m missing is the nested bean swaddle and the halo swaddle (which we actually used in the NICU so I used it for a few days). 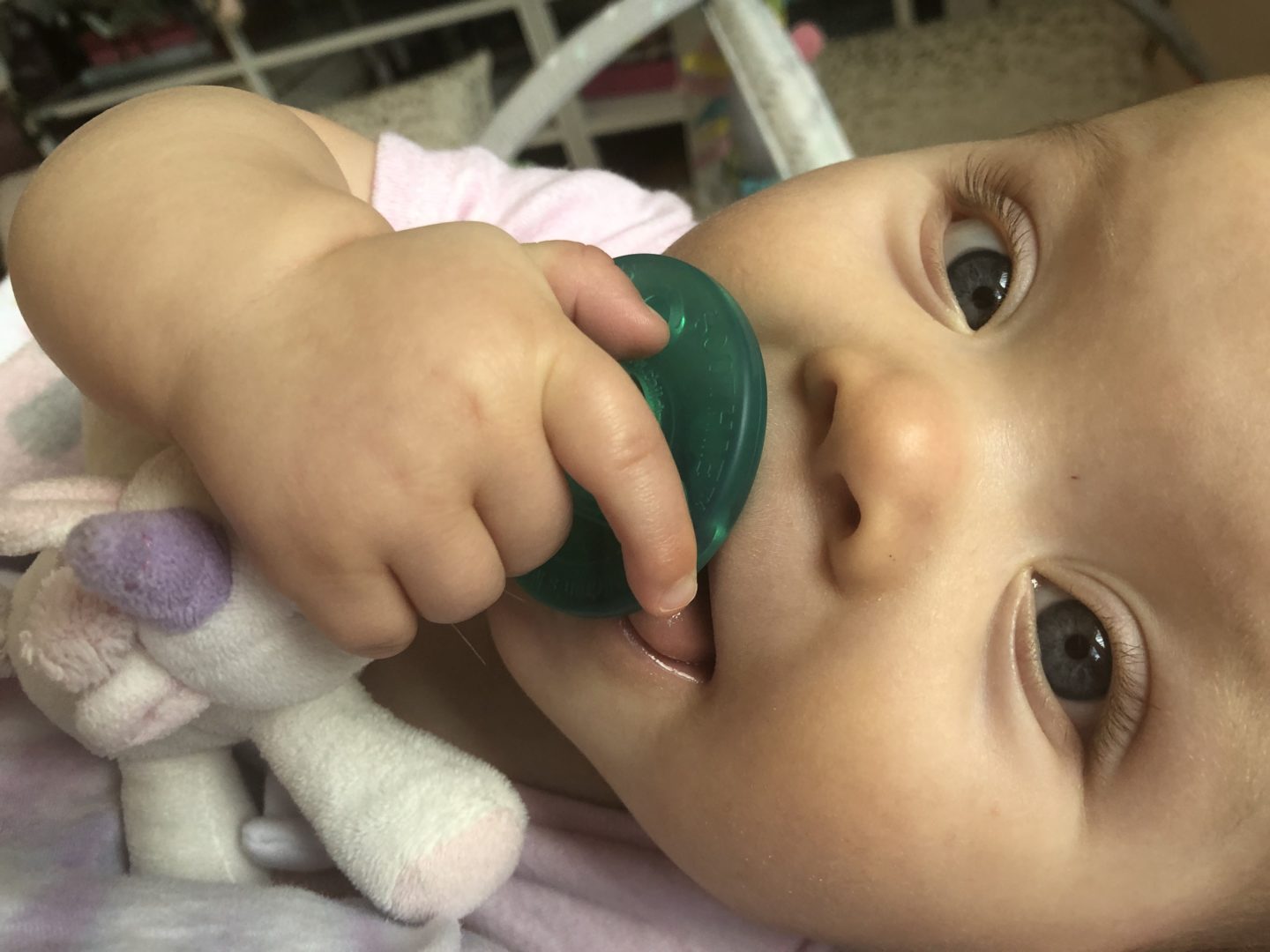 Look at those eyes. She’s now able to grab her own pacifier and put it in. We only use her pacifier for sleeping, and a few times she’s reached for it as a way to alert us that she’s ready to sleep. 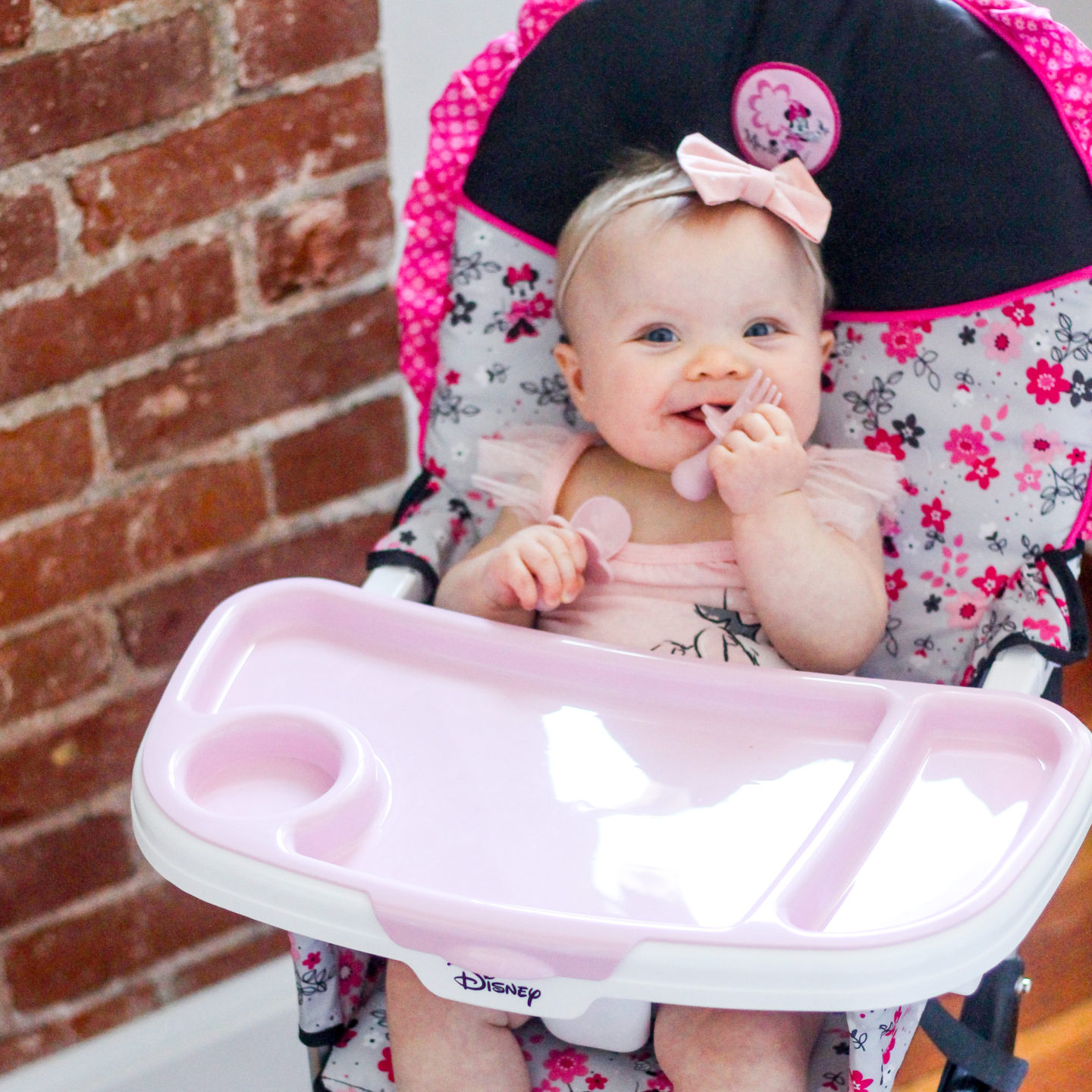 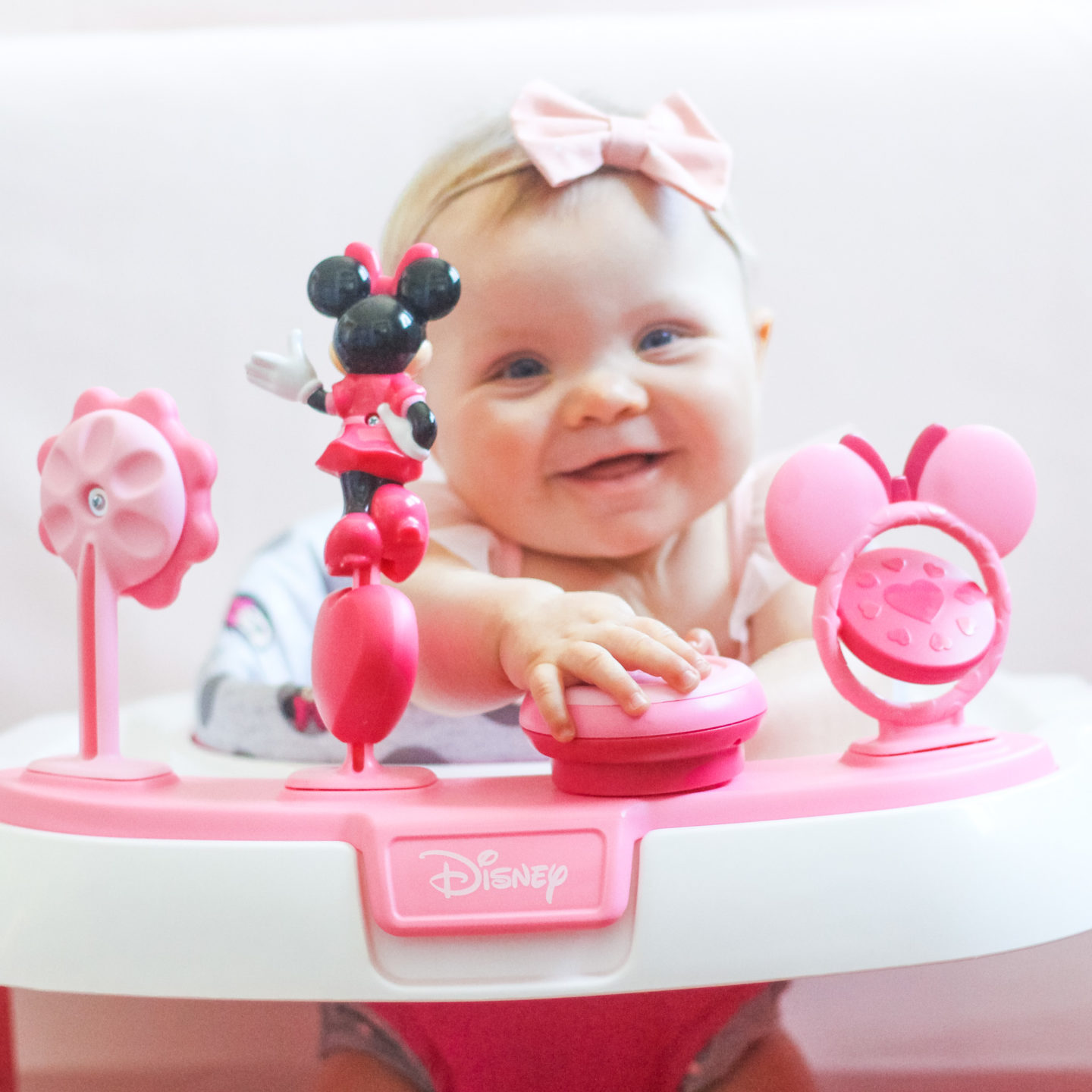 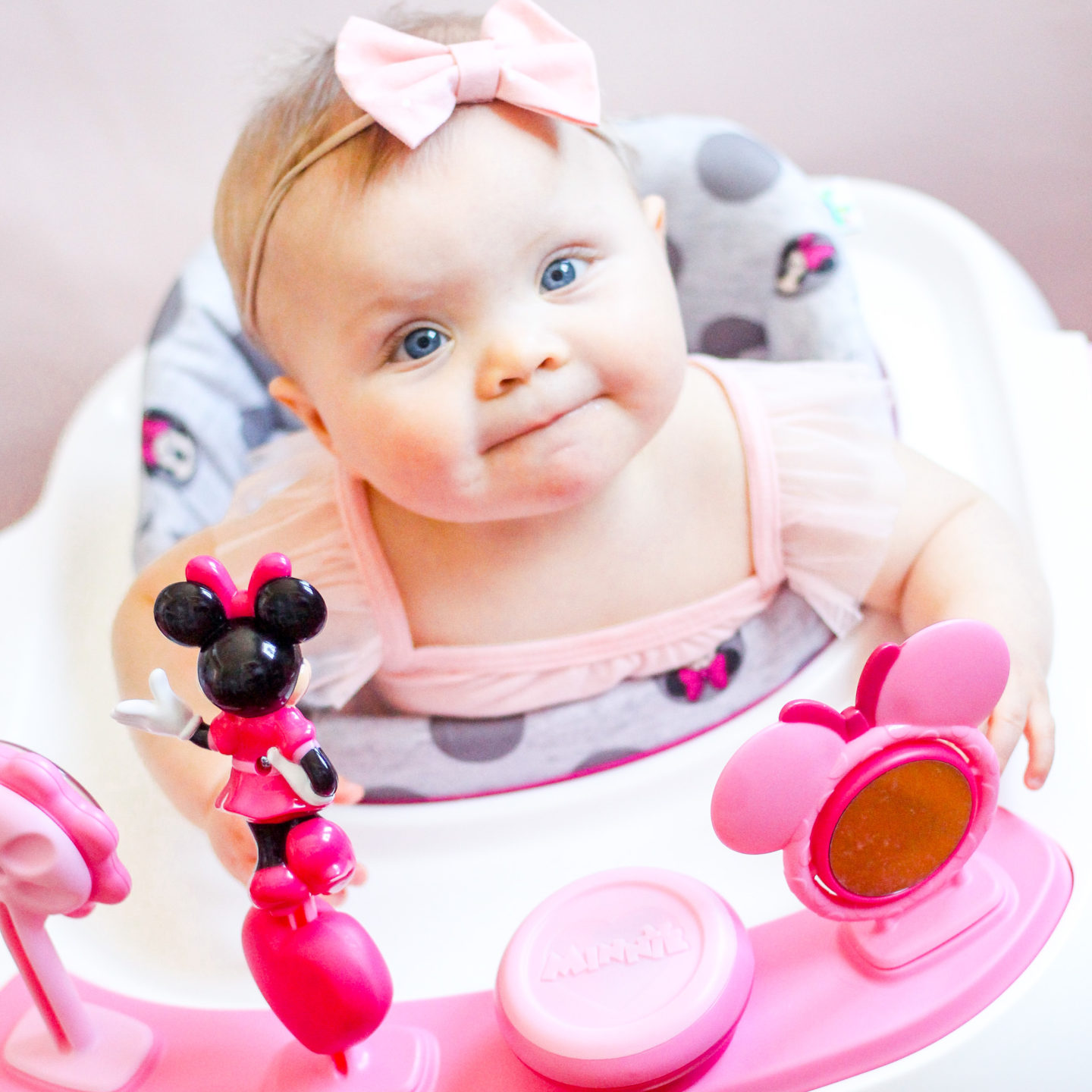 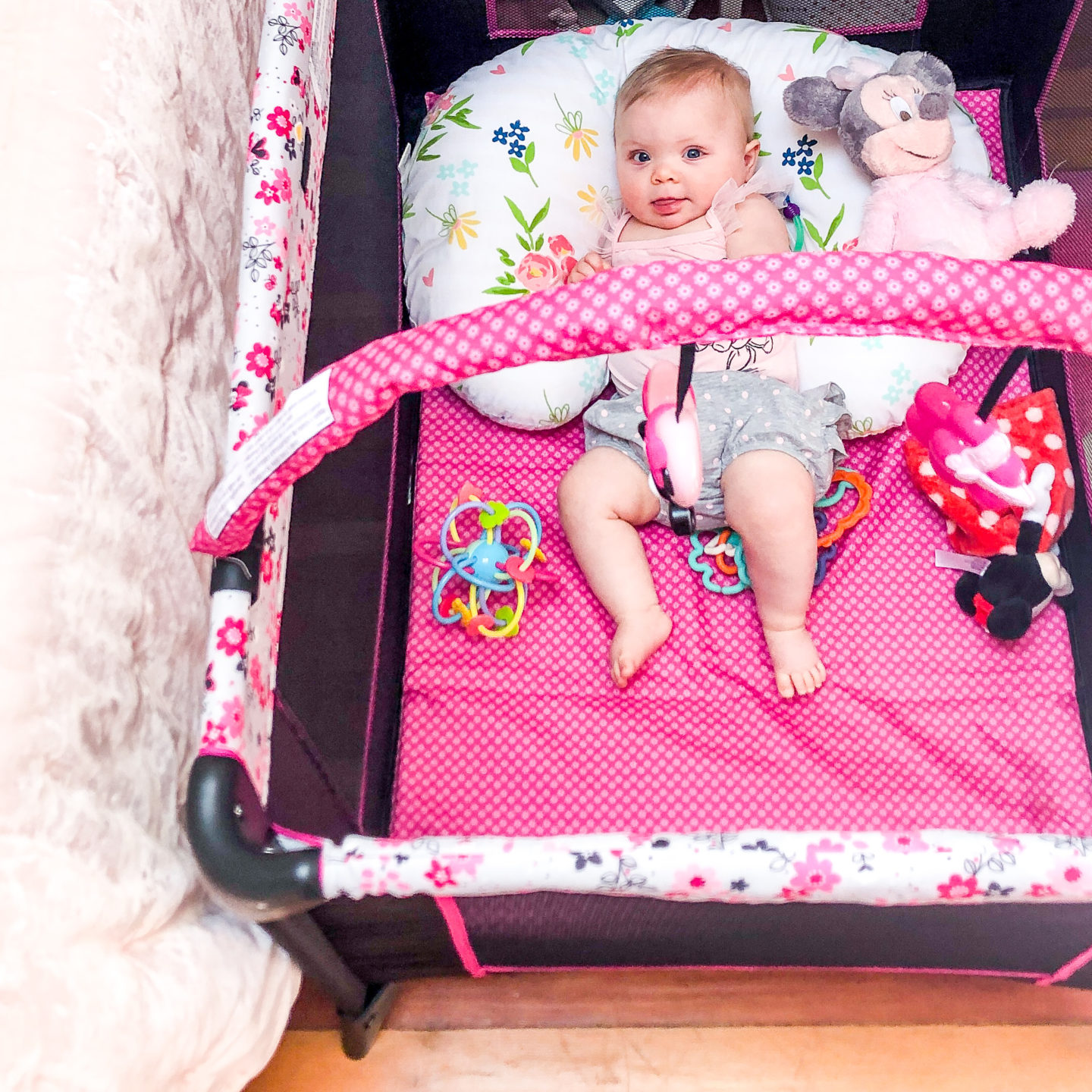 We were SO HONORED to receive three items from Disney Baby: a Minnie Mouse high chair, a baby walker and this cute pack and play. Our apartment is small and so my dad now has the high chair and we’re going to store the pack and play for any future travel, but that walker is AWESOME. It’s not something I would have purchased on my own, but she LOVES IT and it’s so great having a place to put her when I need to go to the bathroom or while I’m working. 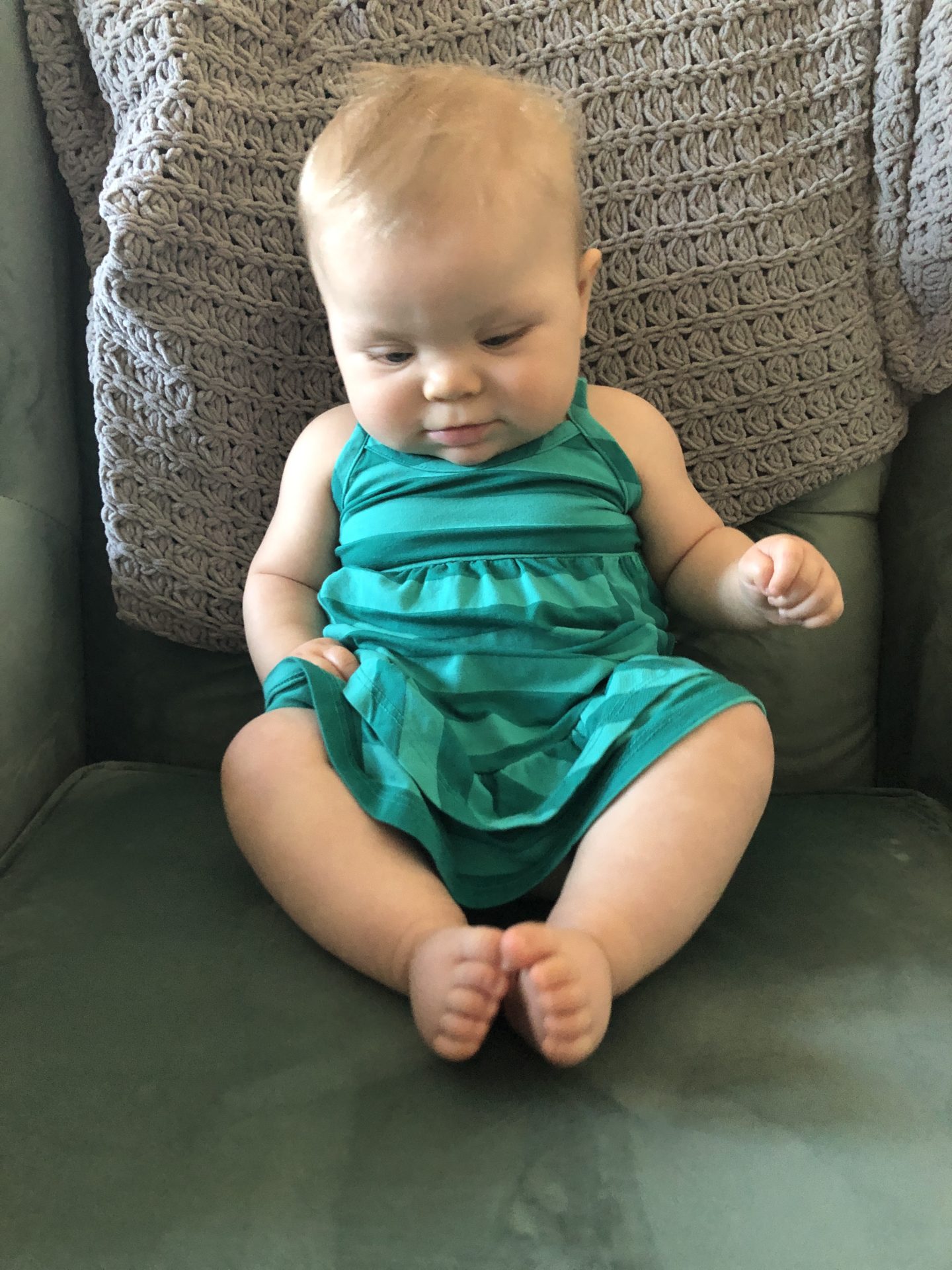 I just can’t. She’s the cutest. 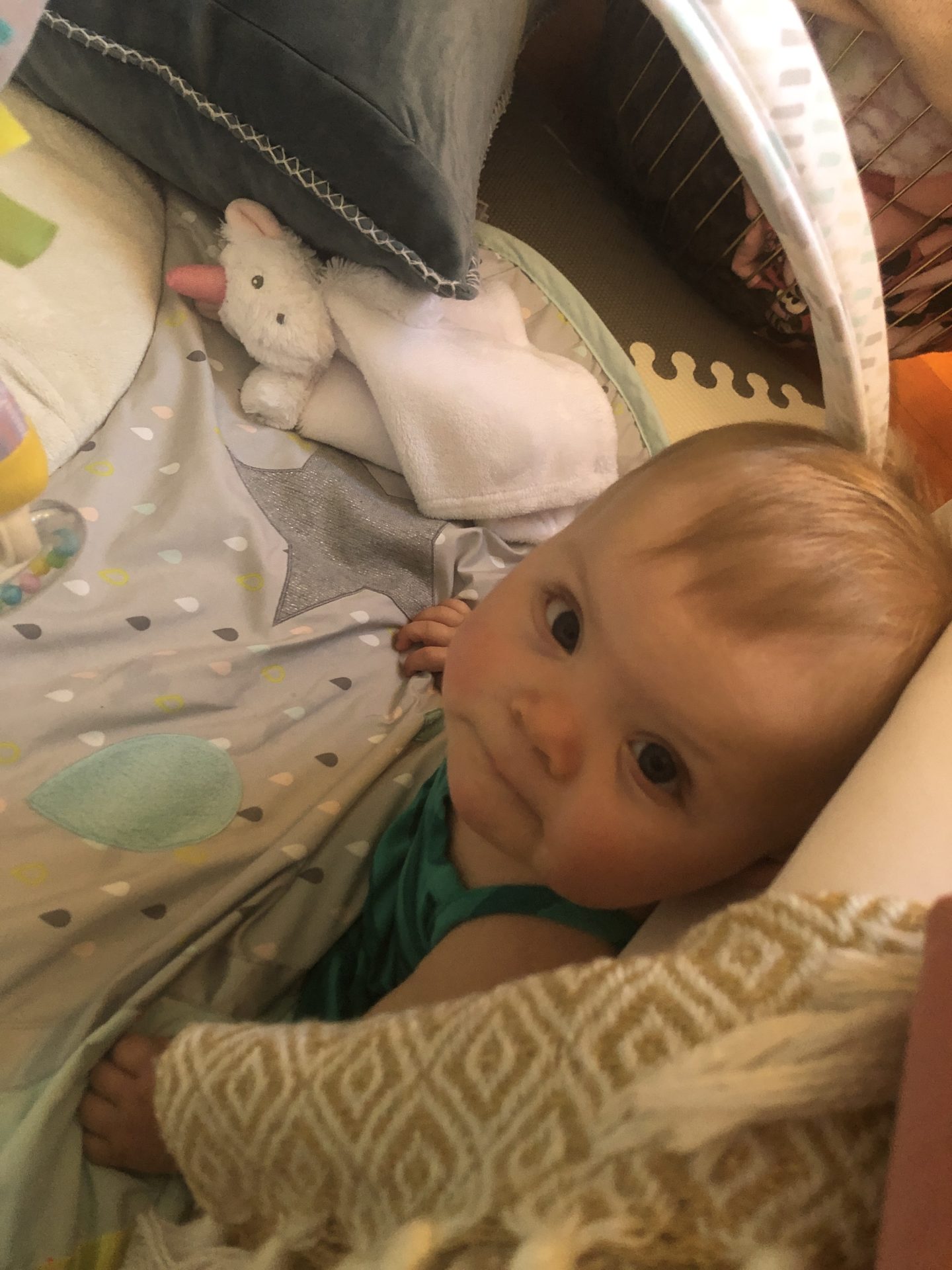 The good news is now she’s so poly poly that she often can end up under the couch if you’re not paying attention, haha. 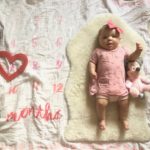 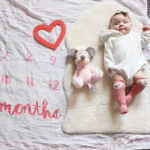 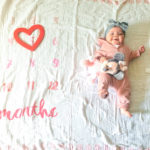 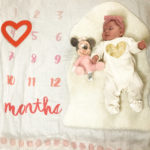 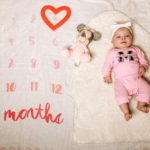 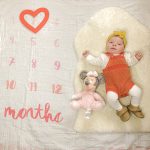 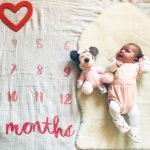